Integrating Retirement Plans – It Is Long Since Overdue 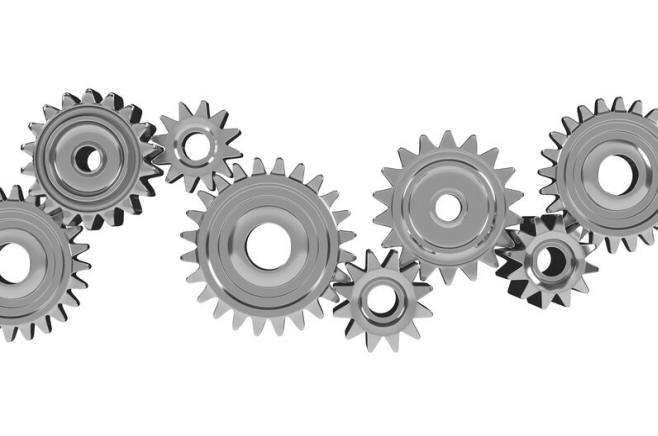 Suppose that automobiles were marketed like retirement plans. Then the chassis, engine and tires would be marketed by different firms, and the buyer would have to put them together. Yes, this would be absurdly inefficient, yet that is exactly the case with retirement plans. The three major components – financial asset management, annuities and HECM reverse mortgages – are marketed by different firms which, with few exceptions, do not talk to each other. The result is absurdly inefficient.

On top of that, the markets for both annuities and reverse mortgages are extremely inefficient, a result of their complexity, the lack of sophistication of most buyers, and the absence of multiple transactions from which buyers can learn. In both markets, the range of prices on identical transactions is obscenely large.

The inefficiency of the piecemeal approach doesn’t much matter to retirees who are wealthy enough not to bother. But it is critically important to the larger and growing number whose home equity comprises a large part of their wealth, and those who are forced to delay retirement in order to make it financially feasible.

The major benefits of integration to such retirees are increased spendable funds during the retirement years, and protection against running out. The benefits stem from the synergies from integration, and competitive pricing on annuities and reverse mortgages. To make this happen, I developed the Retirement Funds Integrator (RFI) with Allan Redstone. RFI is used in developing the illustrations below.

Developing retirement plans that integrate financial asset management, deferred annuities and HECM reverse mortgages, each of which is rife with complexities, for retirees who are past their intellectual prime, posed a major educational challenge. To meet it, RFI incorporates a strategy of “targeted education”, which is consistent with the best practices developed by the the U.S. National Strategy For Financial Literacy 2020, but adds one more feature.

RFI breaks the educational process involved in the development of a retirement plan into two phases. Phase 1 is designed to allow a retiree to design a preliminary retirement plan using a simple calculator that simplifies the amount and complexity of the information required. In this way, the retiree learns what a retirement plan is, how the components fit together, and what a first approximation of her financial future looks like.

In phase 2, the retiree in consultation with a financial advisor who has access to the more powerful version of RFI, converts the preliminary plan into a final plan that takes account of additional features and options that reflect the retiree’s preferences but had been left out of the preliminary plan. This paper is largely focused on phase 1, but a transition to phase 2 is described.

Spendable Funds and Protection Against Running Out

Consider a retiree of 64 who has financial assets of $500,000 and home equity of $400,000. The RFI approach integrates asset management, a deferred annuity (10 years in the examples) and a HECM reverse mortgage credit line. This is compared to a stand-alone approach based on the 4% rule that is widely used by financial advisors. The 4% rule involves draws of 4% of the original asset portfolio amount increasing by 2 percent a year. To make it comparable to RFI, we add a HECM tenure payment, which is a fixed monthly amount. In contrast to the annuity which runs for life, the tenure payment ends if the borrower moves out of the house.

Chart 1 compares the spendable funds available to the retiree under the two approaches, assuming a 4% rate of return on assets. The integrated approach provides more spendable funds over the retiree’s life, and complete protection against running out as a result of living too long. At a 4% rate of return, the 4% rule runs out of assets at age 98, with only the tenure payment remaining. Higher rates of return will avoid calamity under the 4% rule but increase the advantage of the RFI schedule. 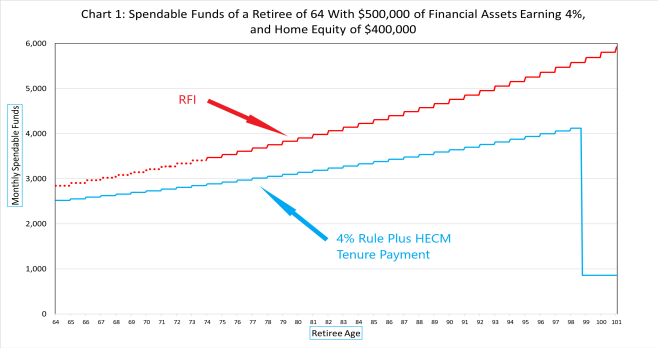 Impact of Competition on Spendable Funds

To assure that retirees using RFI were getting the best competitive prices, we developed networks of both annuity providers and reverse mortgage lenders. The RFI system automatically selects the best deal from those offered, unless the retiree wants to use another provider, in which case RFI will show the cost of indulging the preference. 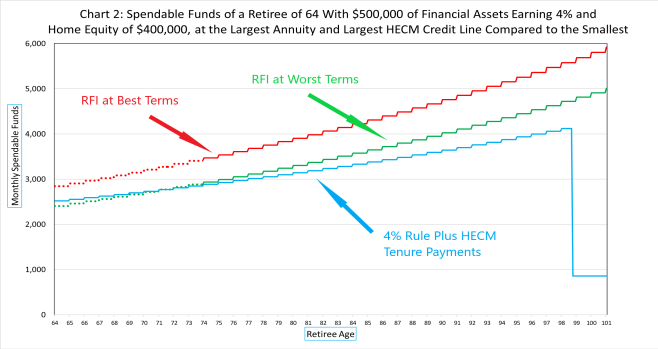 The HECM program could be killed by Congress because of large deficits in the mortgage insurance reserve fund that might require a fund infusion from the Treasury. The causes of the deficits are very clear. The existing stand-alone model has resulted in an excessively large proportion of borrowers drawing maximum cash in the first year, leaving nothing to cushion rising tax and insurance payments in later years. The integrated model, in contrast, includes a life annuity in every case, and in most cases the annuity will rise over time. Foreclosures arising from failure of borrowers to pay their taxes and insurance in their later years will drop like a rock.

Transition to Phase 2: Converting the Preliminary Plan to a Final Plan

These and other adjustable features of retirement plans are executed in consultation with RFI-certified financial advisors who have access to a full function version of RFI. For example, the retiree who plans to travel the world for several years before settling down might opt for a plan that provides increases in spendable funds early on, followed by smaller draws in later years. In the opposite case, the retiree could prefer to spend less in the early years in order to have more later on. These cases, illustrated in Chart 3, show these cases as modifications of the retiree’s preliminary plan. 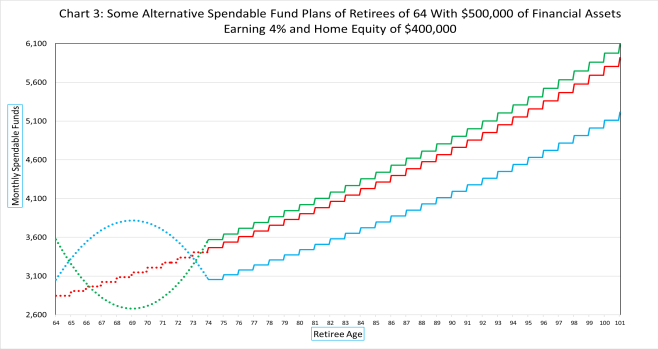 Using RFI, one plan that would meet his needs is illustrated in Chart 4. His financial assets are used to purchase a deferred annuity with a deferment period of 6 years, so that annuity payments begin at the onset of full retirement. This is the purple block of the chart. During the 6-year period of partial retirement, his spendable funds consist of his employment income (the blue block) plus withdrawals from his HECM credit line (the red block). Only a small part of the credit line is used, however, and when he retires, the leftover balance of the line is used to purchase a supplemental immediate annuity, which is the green box. 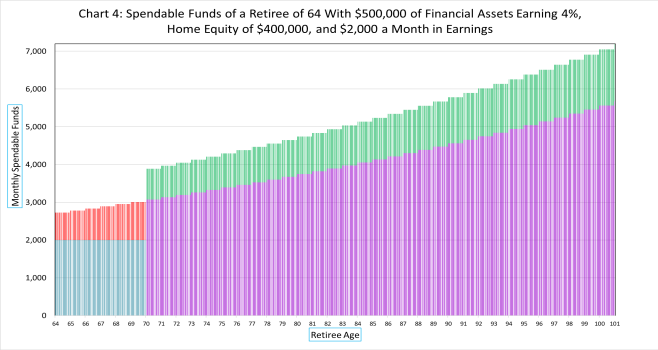 Given the substantial benefits of integration, it is reasonable to ask why it hasn’t already happened? One major reason has been regulatory over-reach. HUD limits the ability of reverse mortgage lenders from participating in ventures with other types of financial institutions, and they instruct HECM counselors to warn borrowers about the hazards of annuities. HUD’s concern seems to be that reverse mortgage lenders and annuity providers would collude to cheat retirees. While this is a well-justified concern, it should not apply to RFI transactions, which assure that retirees enjoy the most competitive terms available in the markets for both annuities and HECMs.

State insurance agencies, in turn, fear that annuities funded with reverse mortgages could make the insurers responsible for depleting the estate values of annuitants. However, retirees using RFI to include HECMs make an informed judgment that they want to convert home equity into spendable funds. The system allows them to set-aside funds for their estate, if this is what they want, and to see the implications of any retirement plan for their estate value. An outright prohibition on use of a reverse mortgage to fund an annuity should not apply to RFI-based transactions.

Resistance comes from the private sector as well. Many advisors who manage assets for clients are hostile to annuities, which reduce a retiree’s financial assets on which the advisor’s fees are based. They argue that they can offer better yields than those earned by insurers on funds provided by annuitants. This is likely to be the case most of the time because investment policies of insurers are very conservative. The difference, which they ignore, is that insurers guarantee a specified return, but financial advisors do not.

Payments to an annuitant, furthermore, include a mortality component, which are the payments not received by those who have died. Insurers are able to continue payments to the retiree who lives to 105 because they can stop payments to those who die at 65. This is what makes annuities unique, and why they should be a central part of retirement plans designed for retirees who are not wealthy.