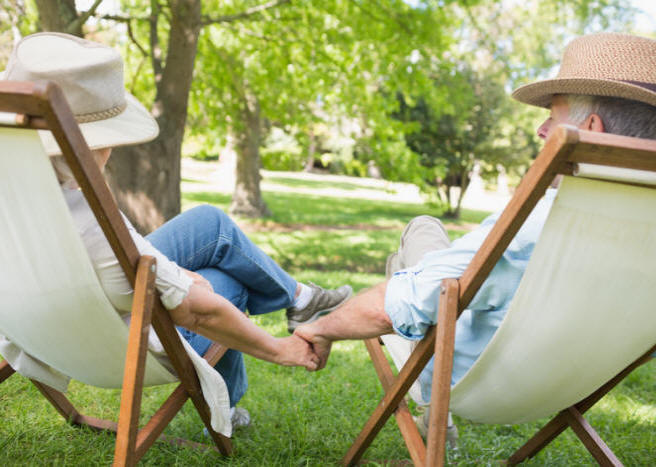 Low interest rates were great when you were young and needed to finance the purchase of a car or a house. Now that you are older, and at least partly dependent on the income generated by the assets you accumulated earlier, the low rates that exist today pose a challenge. The challenge is to find the best options of those that are available.

Where reduced interest rates have an adverse impact on retirees who are dependent on financial assets, lower rates can benefit retirees that are dependent on their home. These retirees draw their spendable funds by borrowing against their home using a HECM reverse mortgage, which is not repayable so long as they live in it. Lower rates allow them to borrow more. For example, in the current market, a 62-year old male could obtain a credit line 15% to 26% more than on August 7, 2016 (the earliest date for which I have data), depending on the size of the initial loan balance.

There are two ways by which the retiree can use a HECM to convert home equity into a reliable and consistent stream spendable funds. One way is to take a tenure payment, which provides a constant monthly payment for as long as the retiree lives in the house. The alternative is to draw a credit line, using part of it to purchase a deferred annuity, with the balance drawn on monthly during the deferment period.

The credit line approach generates significantly more spendable funds than the tenure payment approach, as shown by the table. Columns 2 and 6 assume that interest rates are unchanged, but use different annuity deferment periods. Comparing them with column 6, the credit line/annuity combination generates spendable funds larger than the comparable tenure payment in every retiree group except one.

The exception is a couple both of whom are 63. This anomaly can arise because HECM payments are based on a single mortality distribution, that of the younger borrower, whereas joint annuities are based on the two distributions. A higher tenure payment can only arise when interest rates are both low and stable and when both borrowers are close to 62, the minimum age for a HECM borrower. When both borrowers are 64 or older, the advantage switches back to the credit line approach, even with rates that remain stable at current low levels.

When interest rates begin to rise, existing unused credit lines (which are indexed to the HECM interest rate) will rise with them. Columns 3 and 5 of the table assume that after a year, the rate on the credit line will rise from the current rate of 3.79% to the maximum of 8.348% over a 3-year period.

To capture the impact of this rise in rates, we assume that the monthly payments remain fixed during the deferment period, allowing the unused credit line to grow. We assume further that at the end of the deferment period, the unused line is used to purchase an immediate annuity, causing a jump in spendable funds.   Using the couple of 63 as an example, the payment after 10 years would jump from $980 to $1,125, and if the deferment period is 14 years instead of 10, the jump would be to $1,437. Meanwhile, the tenure payment would remain at $1,043, and the rising rates would eliminate any prospect for an advantageous refinance.

Other Advantages of the Credit Line/Annuity Combination

The reader may have been puzzled by the selection of a 14-year deferment period – why not 15 or 20? The reason is that a HUD rule caps the maximum mortgage amount at 150% of the lower of the FHA maximum mortgage limit or the appraised value of the property, whichever is lower, when the HECM is originated. Since a deferment of 15 years causes the cap to be more constraining, we went to 14 years. Bottom line, the cap is not a significant barrier.

While rising interest rates allow retirees to draw more spendable funds, the increased growth rate on HECM loan balances reduces estate values. With any given rate scenario, the credit line/annuity approach results in lower estate values than do tenure payments. These relationships are illustrated by the chart, which shows estate values for the couple of 63 cited earlier, based on both the credit line/annuity and tenure payment approaches, on three assumptions covering future interest rates.

Retirees using the credit line/annuity plan who are concerned about estate value can opt not to use the reserves that accumulate during the deferment period, forgoing the larger payments in order to enhance the estate value. The tradeoff, however, is not very attractive. Assuming that the credit line growth rate goes to its maximum, the retiree would give up a 25% increase in monthly payments in order to extend the period of positive estate value from age 91 to age 92. I doubt that many of them would find this an attractive option. 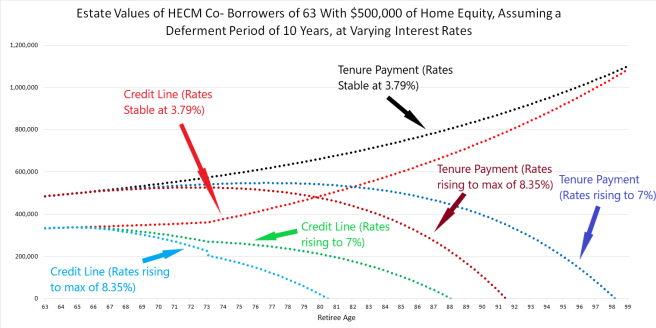 
The table and chart used in this article are based on HECM and annuity prices as of November 23. They were derived from a system developed by the author and his colleague Allan Redstone. Readers with questions can write the author at jguttentag@mtgprofessor.com