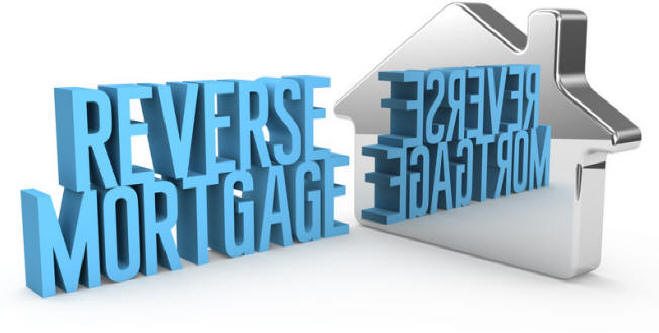 My inbox recently has been crowded with letters from seniors who are anxious about impending adverse changes in the HECM reverse mortgage program. Many of them are wondering whether they should try to finalize a HECM before the October 2 deadline.

The bad news is that, by the time they read this, it will be too late for many if not most. To close a HECM before the terms change, the lender must record an FHA case number, which they cannot do until they receive a certificate from an approved counselor indicating that the senior has been counseled. The senior who follows the usual procedure of contacting a lender before doing anything else will run out of time because the lender will give her a list of counselors, leaving it to the borrower to make the appointment, get counseled, and return to the lender. A possible way to short –circuit this process is for the senior to contact a counselor on her own, which they can do on the HUD web site at https://entp.hud.gov/idapp/html/hecm_cnslr_search.cfm . This could cut 2 or 3 days from the process.

The good news is that the impending changes are modest and should not deter anyone from taking a HECM.


Borrowers pay two insurance premiums on a HECM. An upfront premium calculated as a percent of the property value is currently 0.5%, except where the borrower is drawing more than 60% of his total borrowing capacity upfront, in which case the premium is 2.5%. Most borrowers who pay the 2.5% premium have a substantial existing mortgage balance, which must be repaid with proceeds from the HECM. The new premium is 2% for everyone, which increases the burden for all borrowers except those with large mortgage balances who now pay 2.5%. The upfront mortgage insurance premium typically is financed, as are all other upfront charges.


A PLF is a number that when multiplied by the property value equals the maximum initial HECM loan amount. PLFs are larger when the borrower is older and when the HECM interest rate is lower. HUD issues a table of PLFs for use by the industry, which is being revised downward as of October 2.

Rationale for the Changes


HECM reverse mortgages are insured by FHA, which means that if the loan balance at termination exceeds the amount recoverable from sale of the property, FHA will pay the balance holder the difference out of its reserve fund. The increase in insurance premiums is designed to augment that fund while the decline in the PLFs is designed to cut losses by reducing the growth of loan balances. This is a judgment call, presumably based on loss experience in recent years, but the FHA Mortgagee Letter announcing the changes contains no information on loss rates that would allow outsiders like me to second-guess the decision.

The Negative Impact on Borrowers


To quantify the impact on borrowers, I compared monthly tenure payments, credit lines and credit line growth for borrowers who are 62, 72, 82 and 92, all of whom have a $300,000 house, now and after October 2. I also distinguished the effect of changes in insurance premiums and changes in PLFs.

In general, younger seniors are impacted more than older seniors, and monthly payments are impacted more than initial credit lines. The largest change I found was in the monthly tenure payment to a 62-year old. (Tenure payments continue for as long as the borrower resides in the house). The higher mortgage insurance premiums dropped the payment from $730 to $639, and the new PLFs dropped it further to $613. That is a 16% reduction. For a senior of 92, in contrast, the payment dropped from $2774 to $2581, or by 7%.


Higher insurance premiums impact the borrower differently than lower PLFs. Higher insurance premiums reduce the amounts borrowers can draw by increasing costs that swell the loan balance. The higher the cost, the lower the draw. Lower PLFs reduce the amounts borrowers can draw but without increasing the loan balance. This increases the borrower’s equity in the property when the transaction terminates.

HECM Borrower of 62 With a $300,000 Home Taking the Maximum Tenure Payment: Net Home Equity in Future Years, Now and After October 2 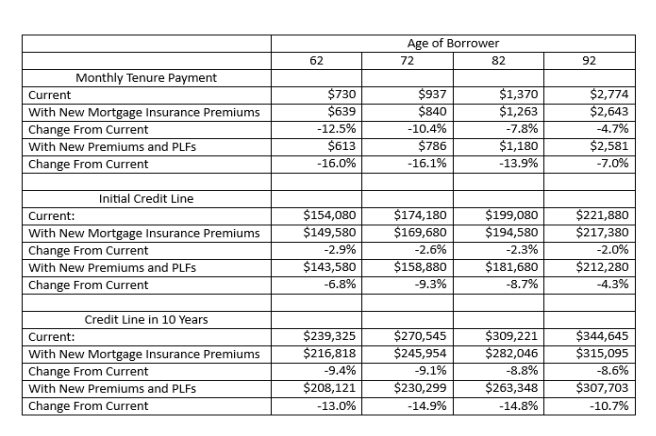 Note: PLFs are Principal Limit Factors that determine HECM gross draw amounts given the borrower’s age, the interest rate and the property value. The interest rate used in this table is 3.195%, zero origination fee, $1620 other fees.


HECM Borrower of 62 With a $300,000 Home Taking the Maximum Tenure Payment: Net Home Equity in Future Years, Now and After October 2

Note: The home is assumed to appreciate by 4% a year.