Will HUD Rejuvenate the HECM Program? 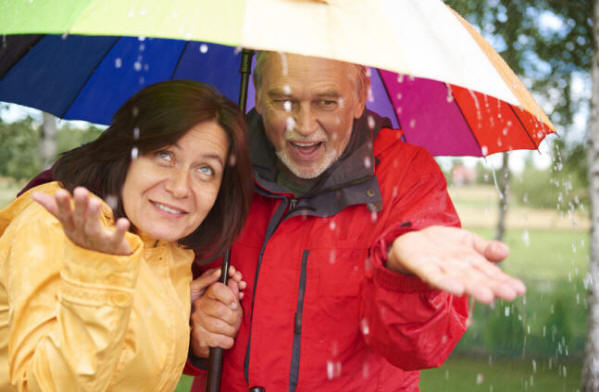 Will HUD Rejuvenate the HECM Program?

This is a revised version of an article posted earlier this month. That article over-stated the importance of HUD’s requirement that the HECM be a stand-alone product, as opposed to being part of an integrated retirement plan. The intent of FHA Mortgagee Letter 2008-24, which bars HECM lenders from “involvement with any other financial or insurance product,” is to prevent collusion between lenders and insurers at the borrower’s expense, which it does. However, it does not bar a reverse mortgage borrower from using the proceeds to purchase an annuity.

On the other hand, the HUD rule that limits the size of the initial cash draw has the effect of reducing the size of the annuity that is purchasable with the HECM, and with it the amount of spendable funds that the borrower can draw over her life. This is explained further below.

Synergy Between HECMs and Annuities

The mortality-sharing feature of annuities allows retirees taking a HECM to draw larger amounts over their lifetimes if they combine it properly with an annuity. This would be particularly valuable for house-rich/cash/poor retirees who have negligible financial assets.

Chart 1 applies to a retiree of 63 who owns a $700,000 house but no financial assets. He draws a HECM credit line and uses a portion of it to purchase an annuity on which payments will begin after 10 years and grow at 2% a year. The balance of the line is used for monthly draws during the first 10 years, also growing at 2% a year, [Note: The math underlying the seamless transition from HECM draws to annuity payments was developed by my colleague Allan Redstone.]

The horizontal line in Chart 1 is the highest HECM tenure payment quoted by any of the lenders who report their prices to my web site. Tenure payments are for a fixed amount and cease if the borrower moves out of the house. With a stand-alone HECM, this is the best the retiree could do.  The HECM/annuity combination can escalate, it is 2% a year in the example, and it runs for life.

The higher of the two upward-sloping lines is based on the best annuity price quoted by a network of carriers who offer deferred annuities, to which I have access. The lower line is based on the lowest price of the carriers in the network, though there could be others with even lower prices. 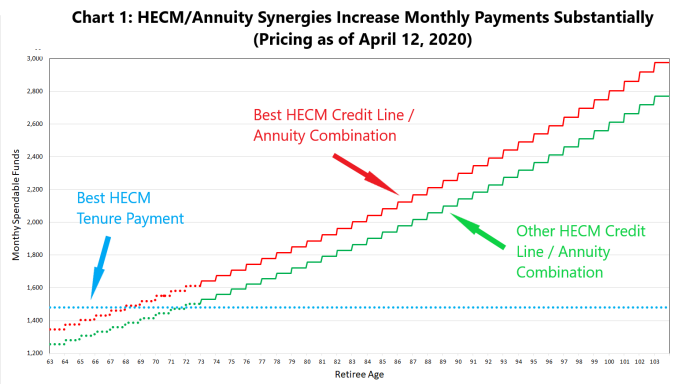 Current HECM losses are much higher than they would be if HECMs were integrated into retirement plans.

The program has been subjected to a great deal of bad publicity, for reasons I can’t explain, but the effect has been to subject it to adverse selection. The HECM client pool has been heavily weighted by borrowers with low credit scores, many in desperate financial condition, who turn to a HECM as their last resort. Many such borrowers fail to pay their property taxes and maintain their properties in good condition.

HECMs that are integrated with asset management and annuities into comprehensive retirement plans are likely to draw borrowers with better payment habits. Further, a borrower who obtains a rising payment for life is better positioned to meet home ownership charges than those who exhaust their HECM borrowing capacity in the first few years.

The intent is to discourage borrowers from drawing as much as possible, without regard to future needs. But forcing a compulsive spender with a life expectancy of 20-40 years to delay drawing funds for a year is unlikely to prevent her from defaulting on her property taxes 10 years later. In contrast, the same requirement on a borrower who is purchasing an annuity has a major impact because it will reduce spendable funds for the rest of her life.

This is illustrated in Chart 2, which covers the same retiree as Chart 1. The higher line is based on an annuity deferred 5 years, which is the optimal period for this borrower. But the price of this annuity exceeds the HUD limit. The lower line, based on a deferment period of 9 years, is the best available that meets the HUD limit. 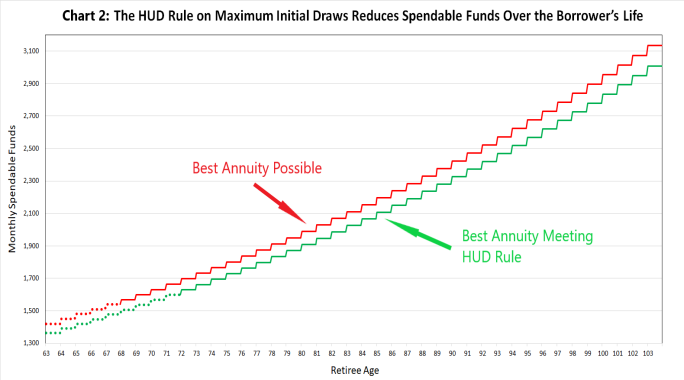 HUD could fix the problem by removing the maximum first year draw in cases when the borrower states that they intend to purchase a lifetime annuity with the proceeds.

The writer has been developing a retirement planning program, called the Retirement Funds Integratortm, a segment of which is directed to the house rich/cash poor retirees discussed above. We call it the “Enhanced HECM”tm, and it will become operational shortly. It marries HECMs with deferred annuities in the way described earlier, and it provides competitively determined annuity and HECM prices. However, in conformity with the stand-alone rule, the program shields the lender from any involvement with the annuity.